The FAST Tracker presents the most comprehensive and up-to-date data on Texas public school districts and campuses. However, the data is gathered from different sources and published at different times.

As a result, year labels throughout the FAST Tracker refer to the year in which the data was published.

FAST uses academic, financial and demographic data from the Texas Education Agency (TEA), the Texas Higher Education Coordinating Board (THECB), the Bond Review Board (BRB) and the Texas Comptroller of Public Accounts.

The data is analyzed and used to create the FAST measures:

In the 2014 FAST results, the FAST Academic Progress, Cost-adjusted Spending and Spending Index measures are three-year averages of data from the 2010-11, 2011-12 and 2012-13 school years — the most recent TEA data available.

View a complete list of almost 200 indicators, where the data came from and the year referenced. 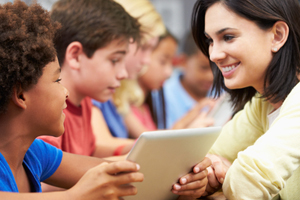 Go Behind the Numbers

A detailed look at the methodology and calculations used to produce the FAST ratings is available at the Methodology page.

The FAST analysis measures achievement by controlling for varying characteristics of students, campuses and districts to estimate how much a district or campus contributes to student learning.

Controlling for factors outside of teaching that influence student performance, we are able to compare academic progress among districts and campuses on a level playing field.

To create valid financial comparisons, FAST identifies up to 40 fiscal peers for each Texas school district and campus, based on common cost factors such as:

The spending index ranges from very low to very high. FAST uses three-year averages for spending comparisons to reduce the effect of one-year anomalies in spending.

A similar process is used to create a spending index for each campus. However, there are no uniform standards for districts to follow when allocating expenses to their campuses. The spending index for campuses is based only on campus-related expenditures, such as instruction, instructional services, school leadership and student support services.

It does not include administrative costs, which may not be allocated equally across all campuses in a district.

Each district has received a FAST rating ranging from one to five stars, with half-star increments.

This rating does not make any judgment of the relative value of spending versus academic progress, recognizing that different school districts have different priorities and different constraints.