Due to the Great Recession and subsequent budget cuts, expenditures have fallen in recent years, and spending growth has been outpaced by enrollment growth. From the 2003-04 school year, inflation-adjusted school district spending grew 12 percent, while enrollment rose 17 percent.

Note: Inflation-adjusted expeditures are in 2012-13 dollars.

Texas school districts report expenditures by objects, which are broad categories of expenditures. The major objects are:

Salaries, wages and benefits for school district employees account for 62.5 percent of all spending on public education. 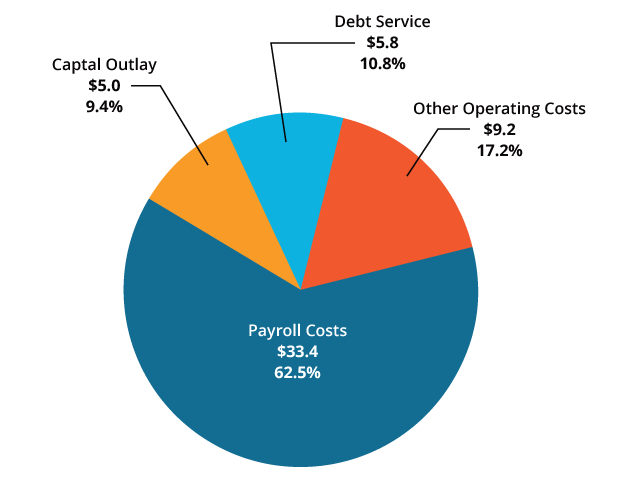 Debt service has grown faster than any other category, up 92 percent since the 2003-04 school year.

For more information about school districts and their debt, please refer to the Comptroller’s recent report Your Money and Education Debt and the Debt at a Glance for ISDs tool.

For more on school district debt, see Your Money and Education Debt and Debt at a Glance for ISDs.

District fund balances represent the difference between a district’s assets and liabilities. While some of this money is reserved for specific legal purposes or district programs, unassigned fund balances for ISDs and unrestricted net assets for charters represent reserve funds.

These funds help to guarantee districts’ cash flow, since state, local and federal funds arrive at different times throughout the year.

It is important to note, however, that while these amounts are not designated for a specific purpose, they are not necessarily available for spending on any purpose.

Texas is a rapidly growing state and higher enrollment is responsible for some of the increase in spending. The number of students in Texas public schools rose by nearly 750,000 since 2003-04.

That is roughly equivalent to adding a district the size of Fort Worth ISD to the Texas public school population each year.

School districts are entitled to 20 percent more state funding for each economically disadvantaged student under the Foundation School Program. As a result, an increase in this population can have a direct impact on state education appropriations.

Further, recent projections show that poverty rates among Texas households could increase from 14.4 percent in 2010 to 17.7 percent in 2050. Coupled with Texas’ increasing population, this trend would likely result in a substantial increase in the number of economically disadvantaged students served by public schools.

Since the 2003-04 school year, the number of economically disadvantaged students has increased by 776,840.

Texas school districts must limit class size to 22 students per teacher in kindergarten through grade four.

Many school officials believe the “22:1” limit interferes with their ability to staff campuses cost-effectively, asserting that classes with up to 25 students can operate without any loss of instructional effectiveness. Some suggest that the 22:1 requirement be based upon average class size rather than applying to all classes, giving districts more flexibility to set class size, allocate resources and limit costs.

For example, a district with 66 students in second grade currently must have three teachers, but the addition of just one more student would require the hiring of another teacher plus the acquisition of additional classroom space.

Texas school districts must limit class size to 22 students per teacher in kindergarten through grade four.

Retirement benefits generally are funded by state and employee contributions. For fiscal 2014, the state contributed 6.8 percent of each teacher’s salary to the TRS pension plan.

The state contribution rate, however, applies only to the amount of each teacher’s salary set in the state minimum salary schedule; districts must supply the state’s share of any teacher salary amount above the state minimum.

School districts, their employees and the state also contribute to the Teacher Retirement System for health benefits.

The table below shows school district and employee contributions to various TRS programs in fiscal 2013.

*Neither TEA nor TRS disaggregates state, district and employee contributions for TRS-ActiveCare.

State law requires TEA to test public school students on what they have learned. TEA developed the State of Texas Assessments of Academic Readiness (STAAR) for this purpose. STAAR tests are administered in grades 3-8, as well as at the end of certain courses at the high school level.

In addition to academic and financial reporting, districts must prepare many other reports and public notices. The costs of these reporting requirements can be significant. For example, several of the required notices must be published in local newspapers, often for several days. The costs of newspaper ads can range from a few hundred dollars in the smallest regional papers to thousands of dollars in major markets, such as Dallas and Houston.

In fiscal 2013, TEA spent an estimated $83 million on assessment and accountability. This does not include money districts spent on administering state tests.